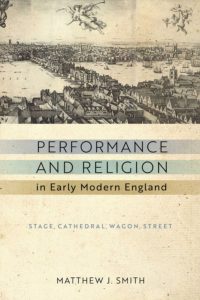 In Performance and Religion in Early Modern England, I seek to expand our view of “the theatrical.” By revealing the creative and phenomenal ways that performances reshaped religious material in early modern England, I offer a more inclusive and integrative view of performance culture.

This book argues that early modern theatrical and religious practices are better understood through a comparative study of multiple performance types: not only commercial plays but also ballads, jigs, sermons, pageants, ceremonies, and festivals. Our definition of performance culture is augmented by the ways these events looked, sounded, felt, and even tasted to their audiences. This expanded view illustrates how the post-Reformation period utilized new capabilities brought about by religious change and continuity alike. I posit that theatrical practice at this time was acutely aware of its power not just to imitate but to work performatively, and to create spaces where audiences could both imaginatively comprehend and immediately enact their social, festive, ethical, and religious overtures.

Each chapter in the book builds on the previous ones to form a cumulative overview of early modern performance culture. This book is unique in bringing this variety of performance types, their archives, venues, and audiences together at the crossroads of religion and theater in early modern England. Scholars, graduate and undergraduate students, and those generally interested in the Renaissance will enjoy this book.

“In its exploration of the religious basis of early modern theatrical experience, Matthew Smith’s study recalibrates our understanding of the period’s theater and plays. This is Mankind and Marlowe both, and an argument worth our careful attention.” ~Douglas Bruster, University of Texas at Austin

“This is the only book I know that pays such careful attention to the specific performance conditions of so many modes and the inter-theatrical relationships among them. Matthew Smith has gathered a diverse set of performance materials into a project of real magnitude, coherence, and consequence. Every chapter of Smith’s book delivers new insights, judicious reframings, and dazzlingly original connections that bring together familiar and unfamiliar texts. This is the kind of book that could well win acclaim for its originality, learning, ambition, and argumentative contribution.” ~Julia Reinhard Lupton, University of California, Irvine

“Matthew Smith’s Performance and Religion in Early Modern England ranges widely and imaginatively over the landscape of late medieval and early modern performance, urgently blurring the boundaries between festival and secular theater, and between theater and sermons, ballads, and jigs. What emerges is a crucial imagining of the critical interplay of presence and representation, and of the critical porousness of early modern performance as well.” ~W. B. Worthen, Alice Brady Pels Professor in the Arts, Barnard College, Columbia University